Four studies, 23 polymorphisms, and one chart

In the chart you find below I collected the single nucleotide polymorphisms (SNPs) that have been associated with ME/CFS by Griffith University’s researchers, to the extent that they are included in the SNPs read by the common 23ndME genetic test. Between 2015 and 2016 the research team published at least four genetics studies, identifying a total of 65 SNPs associated with ME/CFS (Johnston S, Staines D et al. 2016), (Marshall-Gradisnik S, Huth T et al. 2016), (Marshall-Gradisnik S, Johnston S et al. 2016), (Marshall-Gradisnik S, Smith P et al. 2015). Of these, only 23 match the data provided by the 23andME test. In the chart I report these 23 SNPs, their frequency in healthy controls (HC) and patients (CFS), Odd Ratios (OR) and p-values; in addition, I report the respective base pairs for three patients (Pt. 1, 2, 3). In yellow are the genotypes mainly associated with the pathology, in green those that seem to have a protective role against the pathology. For studies no. 1, 2 and 3 I reported the ORs, whereas for study no. 4 I reported the p-values. ORs greater than 1 indicate the genotype’s association with the pathology; ORs less than 1 indicate its protective role against the pathology. P-values less than 0.05 indicate genotypes associated with the pathology. 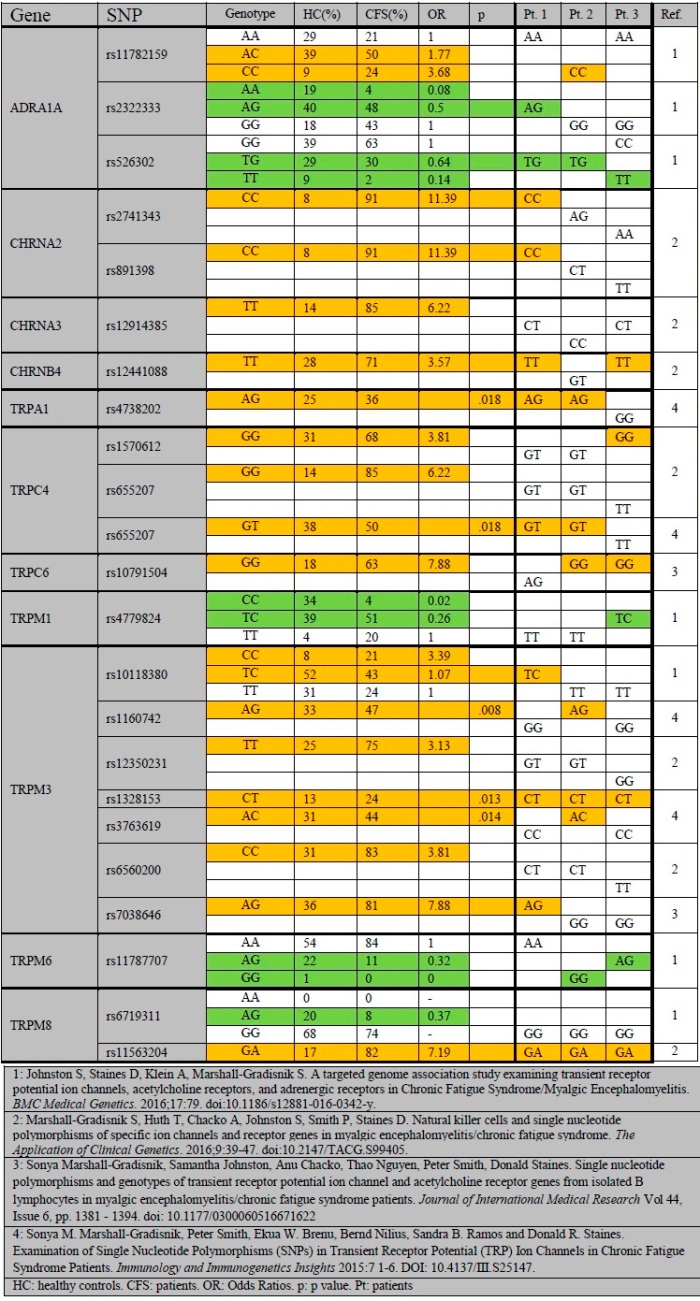 AA genotype for rs2322333 in adrenergic receptor α1 (ADRA1A) has been demonstrated to have a protective role against ME/CFS (Johnston S, Staines D et al. 2016). As shown in the chart, none of the three patients is a carrier for this genotype. ADRA1A receptors are involved in vasoconstriction of blood vessels throughout the body, including the skin, gastrointestinal system, genitourinary system, kidney, and brain. In the brain, these receptors exert effects on the hypothalamic-pituitary-adrenocortical (HPA) axis and in motor functions. In ME/CFS orthostatic intolerance (POTS and/or orthostatic hypotension) is frequent to be found: in fact, this symptom is featured in the diagnostic criteria (IOM, 2015). Midodrine, an agonist of he ADRA1A receptor, has been suggested as a treatment for ME/CFS in a case study (Naschitz J et al 2004). Bearing all the above in mind, position rs2322333 may be linked to some important mechanism at the core of ME/CFS. 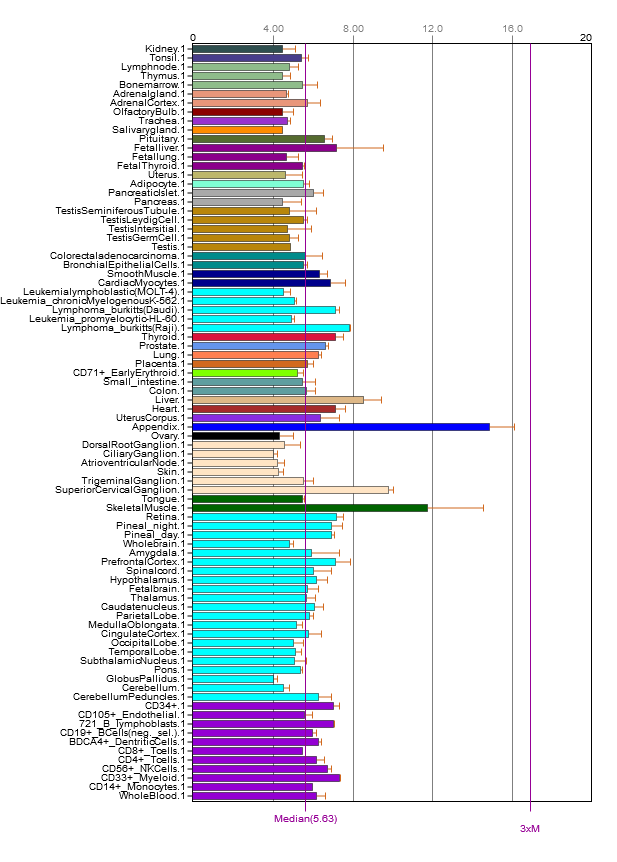 As shown in the chart, patient no. 1 presents two polymorphisms in the gene for nicotinic acetylcholine receptor alpha-2 subunit (ACHRN2), which are associated with ME/CFS. Nicotinic acetylcholine receptors are found both in Peripheral Nervous System (sympathetic and parasympathetic) and in the neuromuscular junction. They are present in the Central Nervous System too. Moreover, the alpha-2 subunit is expressed also by various lymphocytes (B cells, T cells, monocytes), and the same applies to the beta-4 subunit, which presents potentially pathogenic polymorphisms in patient no. 2 and 3. Eventual vulnerabilities in these receptors may lead to countless effects: they may, for example, constitute a predisposing risk factor for orthostatic intolerance, a main feature of ME/CFS. Besides, pyridostigmine, a cholinesterase inhibitor, the enzyme involved in degradation of acetylcholine, has been successfully used in at least one study on ME/CFS patients (Kawamura Y et al. 2003).

Griffith University has published two studies arguing for a connection between ME/CFS and impaired transient receptor potential melastatin 3 (TRPM3) calcium channels. After demonstrating a significant reduction in TRPM3 cell surface expression in NK in patients, compared to healthy controls (Nguyen T et al. 2016), researchers have proved this abnormality to impact calcium influx in NK and postulated this mechanism as the very cause of the reduced NK cytotoxicity observed in numerous studies. Being TRPM3 expressed in many tissues (sensory neurons, kidneys, brain, hypophysis, pancreas: see figure), researchers have suggested its malfunction to be the physiological basis of ME/CFS (Nguyen T et al. 2016). In addition, given previous data (by the same research team) regarding the statistic association between ME/CFS and TRPM3 polymorphisms  (Johnston S, Staines D et al. 2016), (Marshall-Gradisnik S, Huth T et al. 2016), (Marshall-Gradisnik S, Johnston S et al. 2016), the authors have suggested this dysfunction to be possibly due to a genetic predisposition. Looking at our three patients, each one of them is a carrier for at least one genetic variant of TRPM3 associated with ME/CFS. Particularly, genotype CT in  rs1328153 position is present in all of them.