All the following studies have been made mainly thanks to private funding. Please, consider a donation to the Open Medicine Foundation, in order to speed up the research. See this page for how to donate to OMF.

OMF Scientific Advisory Board Director Ronald W. Davis, PhD, has just delivered a speech about ME/CFS at the Albert Einstein College of Medicine at Columbia University in New York. In what follows you find several screenshots that I have collected during the lecture, accompanied by a very short description. I imagine that a video will be soon made available but in the meantime let’s take a look at these slides. 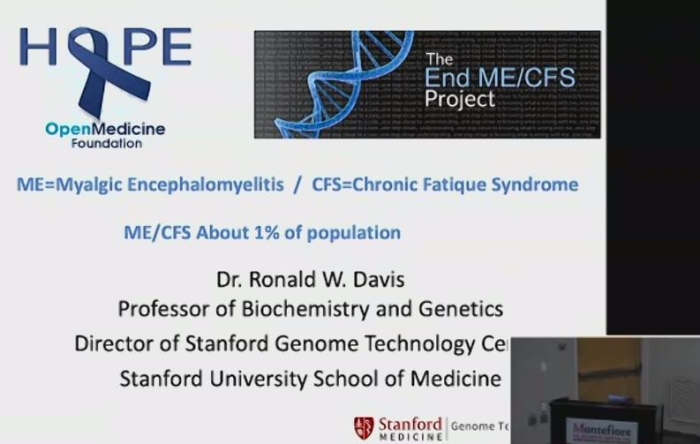 Indoleproprionate is reduced in ME/CFS patients. This molecule is not produced by our own metabolism, it comes from a bacterium of the gut (Clostridium sporogenes) which is low in patients. It has a neuroprotectant effect. Indoleproprionate is currently used in some clinical trials for other diseases and it might be available in the next future as a drug.

Hydroxyproline is high and this is believed to indicate collagen degradation. Ron Davis talked about the case of a ME/CFS patient who turned out to have a problem in the craniocervical junction which was fixed by surgery. Is there a link between high hydroxyproline and abnormalities of the joints (the neck among them) that some patients seem to have? 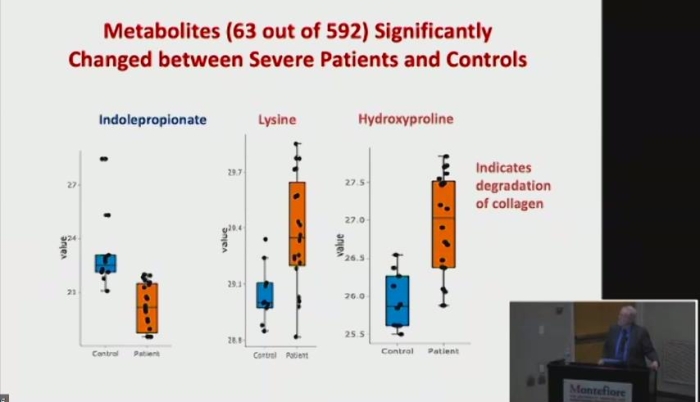 The increase in electrical impedance in blood samples (as measured by the so-called Nanoneedle device) only happens when cells from ME/CFS patients are incubated with plasma from patients. When these same cells (white blood cells) are incubated with plasma from healthy donors, the impedance is normal. For an introduction to this experiment, click here. The published work is here.

The Nanoneedle study has been extended with 20 more patients and 20 more controls.  This device can be used for drug screening, other than for diagnosis.

The peptide called Copaxone, now used in Multiple Sclerosis, seems to work in reducing the impedance in the nanoneedle device (click on the images to enlarge). Suramin also has some effect (on the right). It doesn’t seem as good as Copaxone though, to me…

SS-31 is an experimental drug for the mitochondrial membrane. It does work when used in the nanoneedle device! (click on the images to enlarge).

Nailbed capillaroscopy could be a new instrument for ME/CFS diagnosis. Inexpensive and already in use in hospitals.

No new or known pathogen has been found in patients, so far. This project is still in progress. It is updated as new technologies for pathogen hunting become available.

All the severe patients have at least one defective copy of the IDO2 gene. The same applies to 46 additional ME/CFS patients that have been recently tested for this gene. This is a common genetic problem in the general population, but it is ubiquitous in these patients. And a statistically significant difference is thus present between ME/CFS patients and healthy controls. This discovery has lead to the development of the metabolic trap hypothesis, which has been recently published (here). For an introduction, read this blog post of mine. They are planning to test the metabolic trap hypothesis in vivo using cellular cultures! 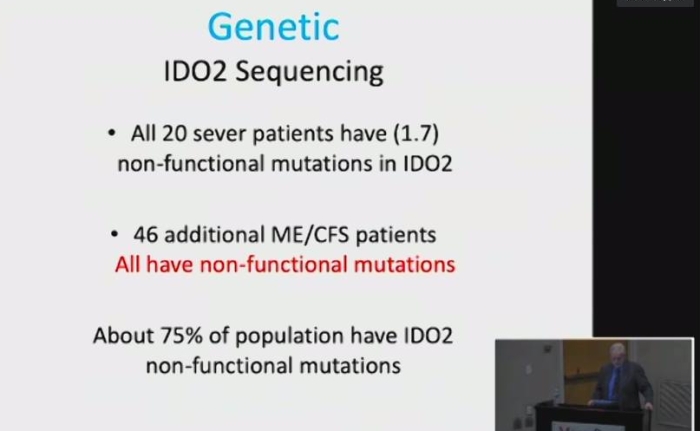 Patients have high mercury (maybe from fish in their diet) and low selenium in hair. Low selenium can reduce the conversion of T4 to T3 in the liver. Low T3 might be a cause of fatigue. High uranium was also detected!

All these studies have been made mainly thanks to private funding. Please, consider a donation to the Open Medicine Foundation, in order to speed up the research. See this page for how to donate to OMF.