My ME/CFS improves during summer, in the period of the year that goes from May/June to the end of September. I don’t know why. I have several hypotheses. One possible reason for the improvement in summer is an interaction between the light from the Sun and some parts of my physiology, the immune system for instance. We know that ME/CFS tends to have an oscillating course in most of the patients (Chu L. et al. 2019), but the presence of a seasonal pattern in this patient population has not been investigated so far, to my knowledge. And yet, if you ask directly to patients, many of them say that they feel better in summer. Unfortunately, we don’t have scientific data on that, this is an area worth investigating with some carefully done survey.

Seasonal variation of the immune system

The immune system has a high degree of variation for several reasons (Brodin P et Davis MM 2017). In particular, there are studies about the seasonal fluctuations in the expression of some crucial genes of the immune response (Dopico XC et al. 2014).

How does this regulation happen? Different mechanisms are possible, some of them might be related to changes in the light we receive from the Sun as the Earth rotates around it. We know that the length of the day has an effect on innate immunity: the more the hours of light, the lower the power of the innate immune system (Pierre K. et al. 2016). We also know that ultraviolet radiation, particularly UVB, is an agonist for the aryl hydrocarbon receptor (AhR) (Navid F. et al. 2013). This receptor seems to reduce the expression of the major histocompatibility complex II (MHC II) in dendritic cells (DCs), thus reducing their antigen-presenting activity (Rothhammer V. et Quintana F.J. 2019). UVB might be able to reach dendritic cells when they are circulating near the skin, during summer, thus inhibiting their antigen-presenting activity. Infrared radiation, on the other hand, seems to have an effect on energy metabolism: in Fall we lose a significant amount of infrared radiation in a wavelength range (0.7-1.0 nm) that is known to have an effect on mitochondrial activity (Nguyen L.M. et al. 2013) and it might perhaps have an indirect effect on immunity too.

Of course, sunlight might be just one of the variables into play. The other aspect I am considering is the seasonal distribution of some common pathogens. Streptococcus, Enteroviruses and Fungi of the genus Penicillium are known to have a seasonal distribution with a peak in Fall and/or Winter (Ana S.G. et al. 2006), (Salort-Pons M et al. 2018), (Coelho Mota C.C. et al. 2010). Common influenza has this pattern too. Rheumatic fever, a disease due to an abnormal immune response to Streptococcus, has its flares in Fall because Streptococcus is more common in that period of the year (Coelho Mota C.C. et al. 2010). Even the composition of the gut microbiota has a seasonal pattern (Koliada A. et al. 2020). I am currently investigating my immunosignature, measured with an array of 150.000 random peptides, to see if I can find some relevant pathogen in my case. You can find this study here.

(A few months after I wrote these notes a pivotal study has been published on these same topics, avalilable here).

I moved from Rome (Italy) to Rosario (Argentina) at the beginning of January. I was very sick and I steadily improved after about 40 days. I became a less severe ME/CFS patients and I could work several hours a day and care for myself, granted that I did not exceed with aerobic exercise. At the end of March, I started deteriorating as it usually happens at the end of September, when I am in Rome. In order to study this phenomenon, I have built a complete model of solar radiation at sea level, which considers the inclination of sunrays in function of the latitude and of the day of the year. It takes into account the effect of the atmosphere (both diffusion and absorption) and the eccentricity of the orbit (Maccallini P. 2019). If you look at the figure below (a byproduct of my mathematical model) you can see that when I started deteriorating in Rosario, the power of sunrays at noon in that city was still as high as it is in Rome during the summer solstice (this is due to the fact that the Earth is closer to the Sun in this period and to the fact that Rosario is closer to the Equator than Rome is).

So I have to discard the original idea that the power within the infrared range, or the ultraviolet radiation, or the visible one is responsible for my improvement in summer. If I still have to consider that sunlight has something to do with my improvement, I must conclude that it is the length of the day the relevant parameter: I may need more than 12 hours of light to feel better. Why? Because the longer the day, the lower the strength of the innate immunity. This is now my working hypothesis and I will start from the following mathematical model to pursue this research: (Pierre K. et al. 2016).

I will also use full-spectrum lamps early in the morning and in the evening to reproduce a 15 hours day, so to dampen down my innate immune system in a safe, drug-free way. I have to reproduce a day of 15 hours and see what happens. In the figure below the hours of the day at dawn and at dusk and the length of the day for Rome, for each day of the year (this is also a plot from my model). 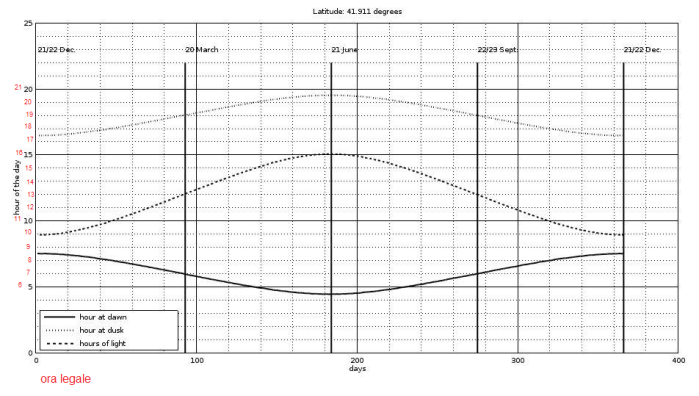 What follows is the script I have coded in order to plot the first figure of this post. More details on this model of solar radiation are here: (Maccallini P. 2019). As a further note, I would like to acknowledge that I started pursuing this avenue in the summer of 2009: I was building the mathematical model of solar radiation (see figure below, made in 2009) but as the summer finished, I turned into a statue and I had to stop working on it. When I improved, about a year later I started working on the systematic analysis of the mechanical equilibrium of planar structures (it is a chapter of this book). I am proud of that analysis, but it has not been very useful for my health… 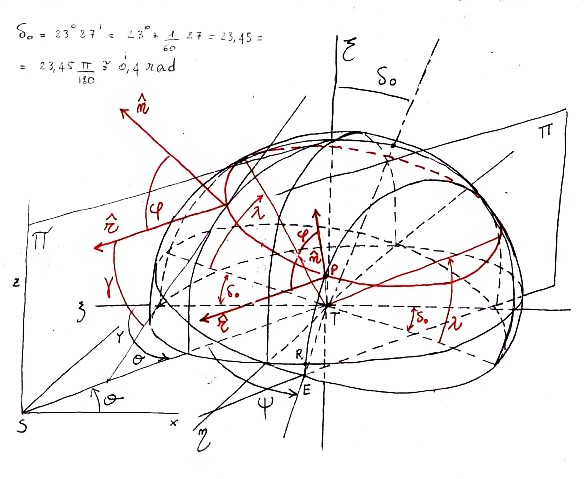